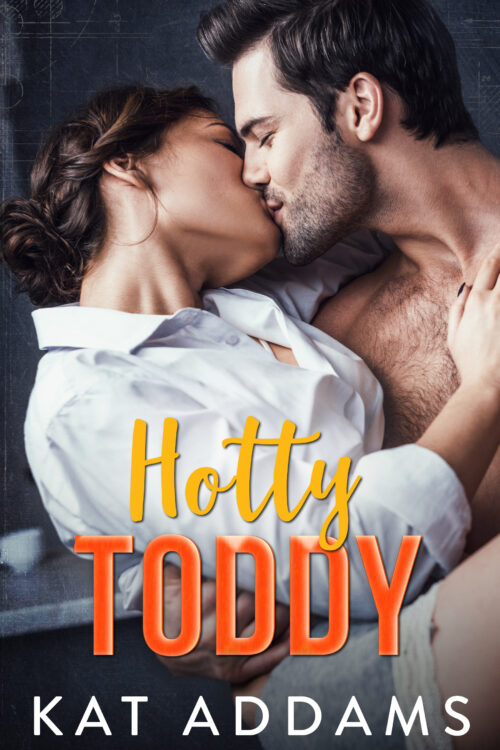 Want an e-book copy of Hotty Toddy for FREE?
Sign up for Kat's newsletter below!

Jules Turner is all about peace, love, and light. She’s always marched to the beat of her own drum, even when that beat took her far from her hometown of Oxford, Mississippi, and straight to sunny California. For the past ten years,  she has been perfectly content to trade in her Southern roots for a yoga mat and herbal tea.

When her meddlesome mother suddenly interrupts Jules’s namaste life by asking her to return for a visit, Jules knows her mom is probably scheming to play matchmaker … again.  She won’t fall for it this time though … except that she does—literally—landing right at the feet of her former flame.

Todd Miller—aka Hotty Toddy—is just as ruggedly gorgeous as he was in high school. When he learns that his teenage crush is back in town—and just in time for their ten-year reunion—he convinces Jules to come up with some scheming of their own. If Todd is lucky, their scheming will take them straight to the bedroom, where he tried—and failed—to seduce Jules on prom night so many years ago.

Pretending to be happily married, Todd and Jules strike out to fool their old high school bullies in the ultimate prank. But they quickly learn that they’re really just fooling themselves. They can’t just pretend. Not when they can’t keep their hands off of each other.

How can two people who have been apart for so long connect again so quickly? What happens if their fake romance turns into something real? Will Todd be able to handle Jules’s free-spirited adventures in California, or can he convince her to stay back in Mississippi and embrace her small-town roots?

With a little bit of scheming—okay, a lot of scheming—Jules just might find that her matchmaking mother knows best.

I'm so ready for this one to come out! I had so mu

#TBT to that time I celebrated with my beautiful c

I love NEON! If you go back and look at the Dirty

Does anyone think of Terrance when they see banana

Have you figured out the answer to this question y

I'm trying to teach myself to slow the hell down.

© Kat Addams | Design by Steamy Designs | Privacy Policy
This site uses affiliate links to Amazon, Google, Apple, and other stores. This provides a small amount of revenue to me and does not cost you anything extra.

This website uses cookies to improve your experience while you navigate through the website. Out of these, the cookies that are categorized as necessary are stored on your browser as they are essential for the working of basic functionalities of the website. We also use third-party cookies that help us analyze and understand how you use this website. These cookies will be stored in your browser only with your consent. You also have the option to opt-out of these cookies. But opting out of some of these cookies may affect your browsing experience.
Necessary Always Enabled
Necessary cookies are absolutely essential for the website to function properly. This category only includes cookies that ensures basic functionalities and security features of the website. These cookies do not store any personal information.
Non-necessary
Any cookies that may not be particularly necessary for the website to function and is used specifically to collect user personal data via analytics, ads, other embedded contents are termed as non-necessary cookies. It is mandatory to procure user consent prior to running these cookies on your website.
SAVE & ACCEPT